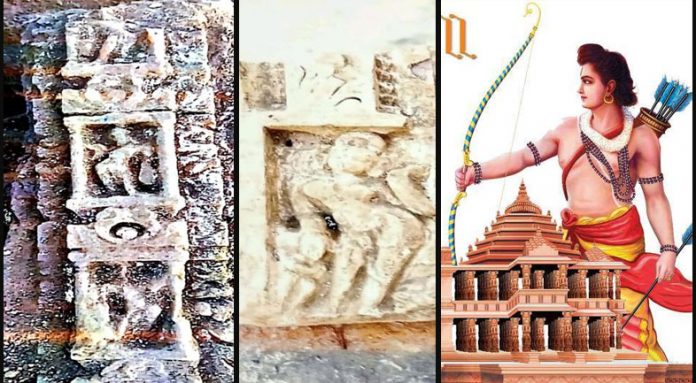 As excavation activities continue on the controversial Ram Janmabhoomi site in Ayodhya, a major new development has taken place. On Thursday, 21st May 2020, in an ongoing excavation, several items that further prove the site to be of an old temple were found at the location. These items include a 5 feet Shivaling, black touchstone pillars(7 in number), 6 pillars made of red sandstone and numerous idols(now broken) of different Hindu Gods.
Champat Rai, General Secy of Sri Ram Janmabhoomi Tirth Kshetra Trust broke this information first to Republic TV. According to him, levelling work has been going on at the this holy site for about 10 days. It was during this levelling work that these items were found.

Photos from The Excavation-

According to the report by Archaeological Survey of India, there stood a ‘temple-like’ structure at the Shri Ram Janmabhoomi site before it was demolished to build a mosque. The mosque was further demolished by karsevaks on 6th December, 1992.
This ongoing dispute for the temple land had always been a political issue due to its communal nature.

“Ram Janmabhoomi Land for Hindus, Muslims to be Given Land Elsewhere” – SC Bench

The Constitution bench of the Supreme Court upheld the rights of the Hindus when it gave its verdict on this case on 9th November, 2019. They said that there was an already built structure underneath the Babri Masjid and it was not an Islamic structure. The verdict awarded the whole Ram Janmabhoomi land to the Hindus and gave an additional 5 acre land to the Sunni Waqf Board elsewhere to construct a new mosque.