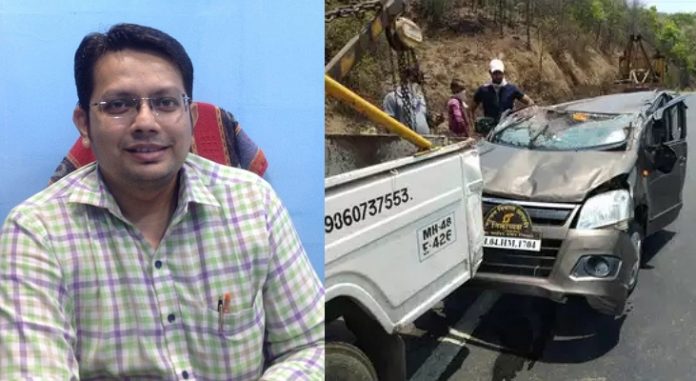 Digvijay Trivedi, the Vishwa Hindu Parishad (VHP) lawyer who was representing the sadhus in the heinous Palghar lynching case died in a road accident on Wednesday, 13th May 2020. It has been reported that the accident happened while he was going to court.

The unexpected accident took place somewhere near the Mumbai-Ahmedabad highway, near a place known as Manor around 9:30 A.M when Trivedi was reportedly heading towards the Dahanu court in his own car. According to the report by Times of India, Trivedi was traveling with a lady in his car. The accident happened on the Mendhwan bridge in the Gujarat lane, where Digvijay Trivedi’s car reportedly skidded off the bridge and turned to turtle off, causing an accident which left the Palghar lawyer dead.

The woman, who was seated just next to Trivedi has survived and is being treated for her injuries. The accident, which left the Palghar lawyer dead comes as a blow to the side representing the lynched sadhus specially as Trivedi was heading towards the court only for the hearing of this particular case.

The Palghar lynching case involves the lynching of 2 Hindu sadhus, Kalpavrishka Giri Maharaj, and 35-year-old Sushil Giri Maharaj along with their driver 30-year-old Nilesh Telgadewere, who were heading to Gujarat via the Mumbai route for giving ‘samadhi’ to their guru. When they entered a village named Gadakchinchale in Palghar district of Maharashtra, their car was stopped and a rowdy crowd of over 150 villagers attacked them. According to the police, the attacked happened on account of the villagers thinking of them as child kidnappers and thieves.

The police tried to suppress the incident, but later, videos of the mob lynching became viral in which the involvement of the police was clearly visible. In one video, an officer who was holding the hand of one Hindu saint let go off him and let the rogue crowd lynch one sadhu to death. While the police and the Maharashtra CM Uddhav Thackray have urged not to make a communal angle out of this incident, there are a lot of reports suggesting that the incident was in fact a communal one where the hand of CPI (M) workers is suspected. Till now, 141 people have been arrested in this case.

The suspicion of some outside forces having an influence on this case has further increased after the accident of Digvijay Trivedi, which left the Palghar lawyer dead.