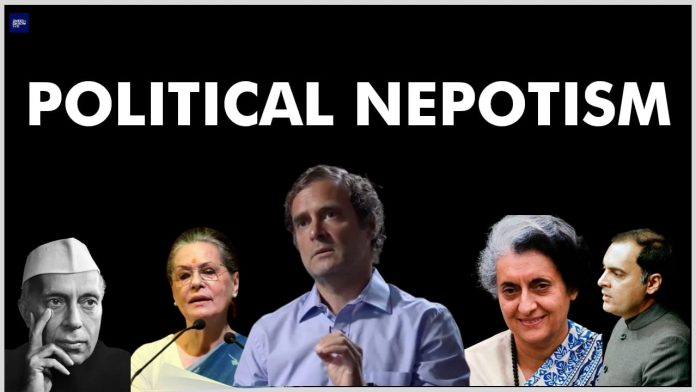 But one thing that runs similarly across party lines and ideologies is the insect known as nepotism. We wrote about nepotism in our previous article too where we equated it with Bollywood and the case of Sushant Singh Rajput. But nepotism in politics is a bit more different than Bollywood.

Why is Politics so Important?

Politics is one such area that directly impact the whole nation. As the citizens of the world’s largest democracy, it is our responsibility that only people who have a proper knowledge of what they want to do and have a blueprint of their plan with which they plan to develop their ward, constituency or the whole nation. But in India, everything is complicated, especially politics.

In India, politics since independence has been dominated by different dynasties. These dynasties have been in power since quite long. The Lalu Yadav dynasty in Bihar, Thackray and Pawar dynasty in Maharashtra, Mulayam Yadav dynasty in UP, Karunanidhi dynasty in Tamil Nadu, YSR Reddy dynasty in Andhra Pradesh, the Nehru-Gandhi dynasty in the centre are some of the political dynasties that personify nepotism in politics.

Nepotism in Politics is Not Necessarily Bad

Political families and them coming to power are not a problem per say. Imagine it this way, is someone’s family has been in one trade, let’s say jewellery, chances are that their kids will also have a very good idea about the jewellery trade, and they would do better in it compared to a newbie since they have seen and have learnt things about that trade since their childhood. Even in developed countries like the USA, we have seen political families such as the Bush family and the Kennedy family coming to power multiple times and doing genuinely good work for their nation.

In India, the problem with this political family and dynastism is different. A lot of the times, we see that elections on a lot of seats in a particular election is not won on a planned blueprint or a development strategy. They are won on other factors such as caste and regionalism. Development and other important agendas are hardly on any candidate’s agenda. Voters also like to identify with the idea of having ‘one of their own people’ or ‘someone from their favourite party’ as their elected representative rather than a deserving candidate. This is not the case in USA or England or France.

Due to this factor, the political dynasties in India are a breeding ground of incompetency, laziness mafias and most importantly criminal minds. This isn’t just something that brews with the children of the politicians but also their close aides, who become their right hands in every activity they do. They form their own mafia wherein they promote and take part rampant criminal activities and corruption in the name of their boss. The politician’s child doesn’t even have to lift a finger to get anything done because his friends, who act as his ‘minions’ do everything for them. This goes on for generations and generations, until one family dismantles and a new political family emerges.

So, a political family not only produces disgracefully bad politicians, they also produce a bunch of big-shot criminals who work hand-in-hand with their political family. In India, political families are more about seizing power this way rather than creating a political environment which makes India developed. In simple terms, the complexity of India, its geography and its such vibrant demography which has so many religions and communities within itself is very much EXPLOITED by the political dynasts and their families for generations.

Let us look at some examples from some politically influential families.

The Nehru-Gandhi family, so to speak has been the at the pinnacle of any political dynasty in India, and it is safe to say that they have smartly capitalized on the habit of the Indians to always want a ‘colonizer’ or a ‘ruler’ above themselves. Since the times of independence, this family has ruled the Indian politics, producing 3 Prime Ministers while somehow completely taking over the control of India’s oldest political party, the Indian National Congress. No one in Congress can survive without sticking up to them. Their control is such that even the most respected of the Congress leaders now have to stick up to their Italian President and widow of Rajiv Gandhi, Antonia Maino, better known as Sonia Gandhi.

She is a known Christian, and has time and again used her cultural background to hurt the Indian Vedic culture. She famously cried for the terrorists who were killed in an encounter in Batla House, Delhi. Under her, the Congress party planned to demolish the Ram Setu, which hold extreme cultural and religious importance for Hindus, India’s majority population. Moreover, she claims that Shri Ram does not even exist, but the religious figures of other religion do.

I can go on and on and on about the financial misdeeds of this family and the scams they committed, their historical blunders in the case of Kashmir, China and the United Nations, but I think this fact that I am about to mention sums up the whole story of Nehru-Gandhi family.

As per an RTI, 12 Central and 52 state schemes, 28 sports tournaments and trophies, 19 stadiums, 5 airports and ports, 98 educational institutions, 51 awards, 15 fellowships, 15 national sanctuaries and parks, 39 hospitals and medical institutions, 37 institutions, chairs and festivals and 74 roads, buildings and places are named after 3 members of the Nehru-Gandhi family. This statement alone is staggering! Nothing showcases the dynastism and the evil of nepotism in politics that has solubilized itself in India better than this statement.

It was because of the incompetence and bad governance, plus a negative attitude towards India’s cultural ethos that made them choose Narendra Modi as their PM. Narendra Modi has no wife or children whom he can benefit with his power. He comes from a very humble background wherein he used to help his father sell tea on a railway station. He is from the background of RSS. In fact, the whole organizational cadre of the RSS is such that dynasties can never come to power. It rewards merit, it rewards excellence and it rewards service. It never rewards a family’s name.

This is to not show how ‘great’ Narendra Modi or the BJP is, but to show that the people of India are now smart enough to notice the blatant neoptism in politics that was making deep inroads in India and creating substantial hurdles in its development.

Sure, the RSS suffers from the problems of its own, but it never rewards dynasties or family name, and does not promote nepotism in politics.