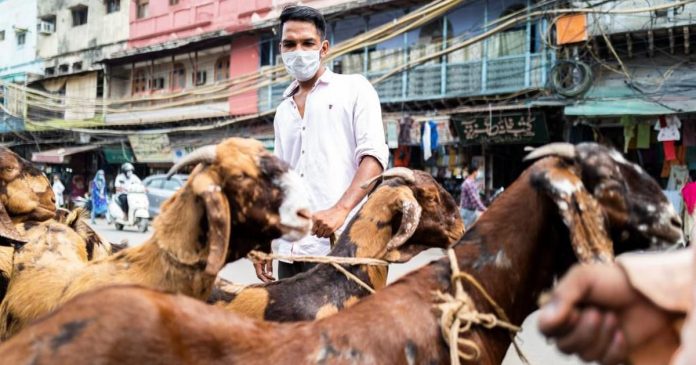 Bakri Eid is one of the most revered and important festival of Muslims all over the world, and it is just around the corner now. The festival is celebrated in honour of Abraham, who had sacrificed his beloved son when God had asked him to do so. The celebrations of this pious day for Muslims is observed with the ritualistic sacrifice of a goat (or any other cattle) in the ‘halal’ way. According to Muslims, the purpose is not shedding of blood to please ‘Almighty Allah’, but to sacrifice something that is close to the devotees. In ancient times, pastoral and agricultural societies in the Middle East had cattle, which was a very important resource for people. So, cattle were sacrificed.

In the 21st century, cattle are hardly an important resource. Agricultural and pastoral economies are a talk of distant past and do not belong to the average basket of resources that a human may desire. While meat may still be the staple diet in large parts of the world, the global ecosystem that we have become due to the influence of other cultures and the ‘internet’ means that concepts of vegetarianism and veganism have tried their best in catching up with the orthodox practice of the halal sacrifice of a cattle. While the animal activists and Muslims have their own issues with each other, in the politically volatile India, this debate seems to have taken a very different route. The route of economics.

The issue actually began when international animal welfare organization PETA made a tweet asking people to stop buying ‘rakhis’ made of leather on Raksha Bandhan, a Hindu festival where sisters tie colourful threads known as a ‘rakhi’ around their brothers’ wrists. It is hugely celebrated all over India. This tweet of PETA quickly became viral for all the wrong reasons. People started bashing PETA for selectively targeting Hindus and not having any say on Bakri Eid, where animals are literally sacrificed. Also, leather rakhis aren’t even used by Hindus, so the tweet garnered more criticism for being completely wrong on factual grounds.

The issue reached loggerheads when PETA came up with an article about how one can sacrifice animals with as less pain as possible instead of criticizing the sacrifice ordeal altogether. Naturally, hate began pouring in from all over for PETA and people started asking as to why such an orthodox and cruel ritual is still being followed. This was when the ‘Bakri Eid Economics’ began getting attention.

This below image shows what exactly the Bakri Eid Economics is, and how it is being portrayed by its backers.

While this image completely ignores the moral argument put up by animal right activists about slaughtering animals, it does so because it tries to compensate for the moral argument with an economic one. It certainly tries to portray that the Bakri Eid economics may not be good morally, but it does help the farmers economically. Moreover, it also feeds a huge chunk of population, thereby feeding the hungry. It sounds so good, right? Well, it really isn’t. This whole argument is used for justifying the whole meat rearing industry.

What is wrong with this argument is that this meat is rarely used to feed the hungry. In fact, until the existence of the meat industry, global hunger may never go away. As of now, the world population is 7.8 billion, with over 820 million recorded people going hungry every day. The strain on natural resources has never been so much, and the solution for global hunger isn’t anywhere in sight.

Now let us take a look at how much resources are used by the $210 billion global meat industry. As said by the Bakri Eid economics argument, the meat industry, which supposedly feeds a lot of people requires quite a lot of resources to produce the meat that is later harvested. According to a research done in 2013, 36% of the world’s crop produce goes to feed the animals. From that 36%, only 12% of that is used to feed the animals! The below image explains the math behind that in simple terms.

The diet gap, meaning what animal product gets converted into actual feedable calories for humans when subtracted from the calories that humans feed to animals for later consumption is quite high. For every 100 calories that the beef industry feeds to a cow, only 3 calories from it comes back on people’s plates. This is a staggering revelation.

If the production of food that goes into feeding the animals that are being reared to produce meat goes directly into feeding the people, there would be about 52% more calories available to people for consumption. With that much food, the problem of global hunger can easily be solved!

Calorie intake is not the only argument against the Bakri Eid economics and the global meat industry. The industry not only require food grains and crop production to survive, but also other resources. A lot of other resources other than the obvious land for food production are used in the rearing of meat production. A lot of resources go into slaughtering, meat processing, packaging and eventually transporting the meat globally, not to mention the wastage that is produced from the whole process that incurs huge environmental costs. To put it in measurable terms, together, the world’s top five meat and dairy corporations are now responsible for more annual greenhouse gas emissions than Exxon, Shell or BP (oil companies). This is a huge revelation.

Naturally, this shows that if a farmer uses the resources that he/she uses in rearing the cattle for meat, then he may save quite a lot of money and still higher produce in terms of the crops the his/her field produces. Also, the huge amount of resources used on meat processing, waste management, storage of meat in freezers and their transportation will also be stopped from incurring.

To conclude, the world is at a population level that has never been seen before. Naturally, the stress on natural resources hasn’t been more. In such a scenario, the chronic problems such as poverty and world hunger can only be solved if global resource management is done judiciously. In such a scenario, wasting precious resources such as land, water and a huge chunk of the global supply chain on meat is probably the worst ever idea and the so called ‘Bakri Eid economics’ is just another manifestation of this bad idea. The meat, other than being uneconomical for its rearers, has a lot more negatives when consumed, but that is a discussion for another day.