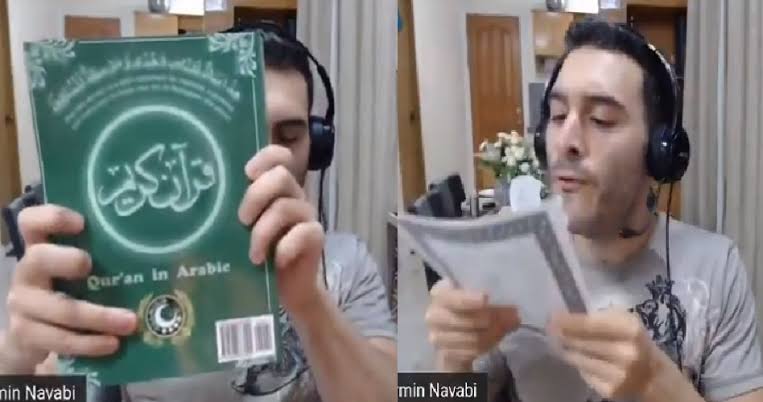 Armin Navabi, an Iranian Canadian ex-Muslim atheist activist, made headlines a couple of months ago for starting a Twitter hashtag campaign trend called “#DesecrateTheQuran”. His act drew attention of people from all over the world for not just making a controversial statement but doing so at a time when the world is already seeing rising anti-Islamic sentiments.

Just a few months back, Islamist mobs in Sweden and Norway had unleashed violence against far-right anti-immigration activist groups and had damaged public properties after there were rumours that some of these activists had burnt the Quran.

In the aftermath of the 2020 Swedish riots, the vocal criticism for radical and extremist views of Islamists became a popular topic of discussion in online social media platforms. It was when Armin Navabi took to Twitter to make a statement where he tore pages of the Quran and spat on it. His campaign drew attention from a lot of Indians on Twitter as India is going through huge developments on investigations of its own violent radical Islamic anti-Hindu riots that shook the whole city of Delhi on February this year.

Navabi didn’t stop at that and went on to make sexualised images of Hindu Goddess Kali, further sealing his position as an atheist against all religions. Hindu twitteratis responded to offensive tweets with offensive tweets. The matter worsened when lewd remarks against Navabi’s mother were made.

Here is where, as a Hindu, one needs to understand certain aspects of atheism and why fighting back such an atheistic rhetoric is counterproductive. The version of atheism that the likes of Armin Navabi identifies with is called ‘New Atheism’. The term ‘New Atheism’ was first coined by the journalist Gary Wolf in 2006 to describe this version of modern-day atheism according to which superstition, religion and irrationalism should not be tolerated but should be countered, criticized, and exposed by rational arguments wherever their influence arises in politics, government, and education.

Most of the self-identified ex-Muslim atheists of the modern times have a tendency to showcase an adamant argumentative nature towards all religions alike. A religion is much more than just ‘theism’. Religion is described as a social-cultural system of designated behaviors and practices, morals, worldviews, texts, sanctified places, prophecies, ethics, or organizations, that relates humanity to supernatural, transcendental, and spiritual elements. To oppose a religion requires more knowledge about that particular religion than how much a follower of it is likely to have. What is viewed as mere ‘faith’ by a follower of a religion is what should be viewed as ‘a concept that needs to be disproven’ by an atheist. It is for this very reason why an atheist, before disproving a particular religion based on rationales, must study that religion completely to be able to logically explain the misalignments of it with rationality.

A great example was seen in the case of Armin Navabi himself. The moment he jumped in on critiquing Islamists and blaming them for the violence that unleashed in parts of Europe this year, Hindus vocally showed support for him for taking a supposedly ‘brave stance’ on the rising terrorism of radical Islamists around the globe. India itself was just recovering from its own aftermath of a violent radical Islamic anti-Hindu riot that has been the focal point of all political narratives in the country this year. Navabi did not necessarily disappoint his new found short-lived Hindu fanbase because he never promised them of an allyship. Hindus themselves committed the mistake of identifying him as an ally based his anti-Islamic stance.

For an atheist (here, Navabi) who grew up in a Muslim household, he was taught only about Islam all his life. His opposition to religion is a direct indictment of his opposition to Islam. And he identifies himself as an atheist solely because the religion he was raised in, did not live up to his judgment of morality. Besides this, monotheistic religions like Islam, Judaism, Christianity, etc. have ordeals in binary shades. Such religions often describe mortal actions as either worthy of finding a place in heaven or hell. Navabi’s opposition to such binary notions is well understandable if one observes it from the Hindu perspective. He is an ex-Muslim turned atheist who is bound to display his rebellion on anything that remotely touches the edges of any religion-like idea. Therefore, it is no surprise that he is likely to dismiss any remarks one would throw at him justifying how different their religion is from the rest. This version of atheism is what is termed as ‘New Atheism’. It is more of a strict opposition to religion than it is on the lines of criticising religion as a definitive atheist should. If one can see where his abilities to form perceptions on religion comes from, it is indicative of that same binary religious environment he grew up in. That religious environment forces one to accept a certain role in that same society, failing which would be counted as a sin. The exact point where Navabi defeats his own logic is when he chooses to do the same but from the opposite side when he accuses every follower of every religion of pertaining to their faith without knowing each religion minutely. His brand of atheism is like a religion in itself; a religion that claims all other religions to be wrong. But isn’t that what every other religion already is?

A Hindu is supposed to be smart enough to not give the upper hand to any anti-religion idealist who claims that a certain religion is wrong. No matter how much one disagrees with Islam or Christianity or any other religion for that matter, as long as the subject is subscribed to the idea of ‘New Atheism’, he is no ally to the Hindu. Hinduism is not a competition to Islam or Christianity. Hinduism is a standalone winner, not a mere title-holder of ‘somewhat better than the other religions’.