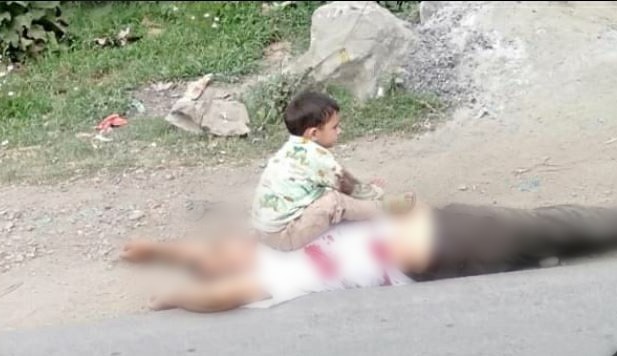 Incidents around us prove every day that it is not at all tough to manipulate an issue so that facts get hidden and ultimately it becomes all but a political propaganda. As Sambit Patra trends on 6th all across India on Twitter, one cannot look the other way and ignore this above-mentioned fact.

Heartbreaking images of a 3-year-old boy sitting on the motionless body of his grandfather in J&K’s Sopore has emerged from an encounter site. The 60-year-old grandfather was a civilian who was killed in the cross-firing on Wednesday morning in Kashmir when an encounter broke out between militants and security forces. The cops as they reached, rescued the boy and took him to a shelter. The boy wailed uncontrollably over his grandfather’s body. A police person carried the baby on his lap and took him away from the encounter site. This incident started a whole new level of propaganda against the Indian armed forces and ultimately, Sambit Patra.

Kashmir, which has been witnessing the persecution of Hindus since over a millennium experienced a major persecution of the native Kashmiri Pundits by Islamic militants. Calls to kill the ‘kaafirs’ where made from every nook and corner of Kashmir, especially mosques. Jihadis from as far as Saudi Arabia and Morocco came to Kashmir to complete the task.

The whole world ignored this problem while watching it silently. Since the last 5-6 years, while the PM Modi led NDA government have done their level best to make things stable with the abrogation of Article 370 and 35(A) of the Indian constitution, the fact remains that terrorist organizations like the Hizbul Mujahideen is blossoming and their young terrorists are worshipped by the local Kashmiri people, all of whom are radicalized and are increasing looking to spread Jihad in Kashmir.

Today, just as the incident involving the grandfather and his grandson became viral on the internet, BJP spokesperson Sambit Patra tweeted the below pic with the caption ‘Pulitzer Lovers??

The tweet was clearly a jibe at the Pulitzer Prize winners, whose photos depicted the so called ‘rebel’ movement of Kashmir. The rebels are basically Islamic terrorists who are now being forced to bear the brunt of the counter-attacking movement by the Indian forces. Incidentally, these photojournalists, who openly said that the Kashmir region is struggling to gain independence were also congratulated by Rahul Gandhi, on whom Sambit Patra took a jibe.

But as it is with Twitter and other social media websites, the international nexus of human rights ran their own propaganda with the trend #KashmirBleeds , claiming that it was the Indian security forces that claimed the life of the grandfather, whereas it was completely the other way round. The hashtag so far has gained millions of tweets under which photos that expose the truth got lost.

While that hashtag went viral, a war of words broke out between Sambit Patra and some Bollywood celebs who instead of saying something against the rise of radical Islamic terrorism went on to bash Sambit Patra for a tweet they claimed was ‘insensitive’. Dia Mirza led the virtue signalling liberal bandwagon, followed by music director Vishal Dadlani.

After this, Minister of Pakistani government Fawad Hussain joined the bandwagon and started bashing Sambit alongwith the Bollywood celebs. Yet again, Bollywood gave Pakistan a moment to criticize us. Yet again, the real issue of Islamic terrorism and the rise of Jihad in Kashmir got sidelined. Yet again, all this was achieved with the help of Bollywood, whose movies we watch and enjoy.