The Positive Indian
Home Opinion Nehru’s Mercy Petition- The Nabha Incident: What The Congress Hides from You...
Facebook
Twitter
WhatsApp 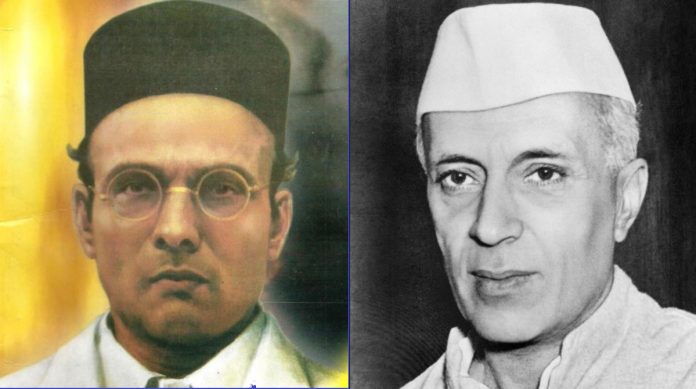 From being called a traitor of India to being called a fascist who had his hands ‘bloodied’ in the murder of Mahatma Gandhi, Vinayak Damodar Savarkar, better known as Veer Savarkar is always in controversy in the political strata of India. While he garners support from a big chunk of population, especially for being the creator of the Hindutva ideology and for being the ‘ideological father’ of the current Narendra Modi led government, but his critics also aren’t few in number. The only thing they remember is the Savarkar mercy petition.

Naturally, the opposition comes from the opposition, the Indian National Congress party, who has a lot to say against the Savarkar mercy petition. Despite some letters by Indira Gandhi making their way in the public forum where she called Savarkar ‘a brave son of India’ the Congress party just doesn’t seem to care. There have been many instances where they have brought up the Savarkar mercy petition which he wrote to the English after 12 years of ‘Kala Pani’. Ironically, what the Congress forgets is that their own ideological father, Pandit Jawaharlal Nehru also wrote a similar mercy petition to the Britishers.

Before talking about the Nabha incident, which is when Nehru wrote his own mercy petition, the reader must know that in British India, nobody was as close to the British as Jawaharlal Nehru was. Upon research, one will find many instances of how close he was with them, and how comfortable his jail stays were. In one incident, the jail authorities let Nehru off from jail even without him asking for it! Compare this with the cellular jail in which they put in Veer Savarkar. It was a cellular jail in the remote islands of Andaman & Nicobar where the dangerous of people from across the Indian subcontinent had been put. Dangerous not to the society but dangerous to the idea of an India under the British. Forced labour, starvation and solitary confinement are just a few of the atrocities which the prisoners in the dreaded ‘Kala Pani’ endured.

After this interview, Jawaharlal Nehru’s father, Motilal Nehru was a very influential person, and after his interview with his son, Jawaharlal Nehru was asked to sign the 2 week bond, which meant that he was to never visit the territory of Nabha ever again, which he duly signed, thus giving up and surrendering to the British only after some days of jail time, in a standard Indian jail.

Now, coming back to the Nabha incident, all one needs to do is read Jawaharlal Nehru’s autobiography ‘Total Freedom’ which has chapter called ‘A Prelude to Nabha’. To make the reader’s job easier, we have included the exact lines of the chapters describing the incident. Here goes-

“Well, see after the deposition of the Maharaja of Nabha by the Government of India. “A British Administrator was appointed to rule the Nabha State. This deposition was resented by the Sikhs, and they agitated against it both in Nabha and outside. Sikhs were protesting in jathas and were getting brutally suppressed by British administration, I had been reading accounts of these beatings from time to time, and, when I learned at Delhi, immediately after the Special Congress, another jatha was going and I was invited to come and see what happened, I gladly accepted the invitation. Two of my Congress colleagues A. T. Gidwani and K. Santanum of Madras accompanied me.

On arrival at Jaito, the jatha was stopped by the police, and immediately an order was served on me, signed by the English Administrator, calling upon me not to enter Nabha territory and, if I had entered it, to leave it immediately. A similar order was served on Gidwani and Santanum, but without their names being mentioned, as the Nabha authorities did not know them. My colleagues and I told the police officer that we were there not as part of the jatha but as spectators, and it was not our intention to break any of the Nabha laws. Besides, when we were already in the Nabha territories, there could be no question of our not entering them, and obviously we could not vanish suddenly into thin air. Probably the next train from Jaito went many hours later. So, for the present, we told him, we proposed to remain there. We were immediately arrested and taken to the lock-up. After our removal the jatha was dealt with in the usual manner.

We were kept the whole day in the lock-up, and in the evening, we were marched to the station. Santanum and I were handcuffed together, his left wrist to my right one, and a chain attached to the handcuff was held by the policeman leading us. Gidwani, also handcuffed and chained, brought up the rear. This march of ours down the streets of Jaito town reminded me forcibly of a dog being led on by a chain. Then we all three were transferred to nabha jail, tied together.”

This is how, in Jawaharlal Nehru’s own words, he ended up in jail. Here is how it follows-

“In Nabha Jail we were all three kept in a most unwholesome and insanitary cell. It was small and damp, with a low ceiling which we could almost touch. At night we slept on the floor, and I would wake up with a start, full of horror, to find that a rat or a mouse had just passed over my face. Meanwhile, we were approached, on behalf of the Administrator, by the superintendent of the jail and told that if we would express our regret and give an undertaking to go away from Nabha, the proceedings against us would be dropped. We replied that there was nothing to express regret about, so far as we were concerned; it was for the administration to apologize to us. We were also not prepared to give any undertaking.

After the trial was finished, we were waiting for the judgement but the judgment was not read out; we were merely told that we had been awarded the maximum sentence of six months for breach of the order to leave Nabha territory. In the conspiracy case we were sentenced the same day to either eighteen months or two years, I forget which. This was to be in addition to the sentence for six months. Thus, we were given in all either two years or two and a half years.

My father knew something of Indian states, and so he was greatly upset at my unexpected arrest in Nabha. Only the fact of arrest was known; little else in the way of news could leak out. In his distress he even telegraphed to the Viceroy for news of me. Difficulties were put in the way of his visiting me in Nabha, but he was allowed at last to interview me in prison.”

After this interview, Jawaharlal Nehru’s father, Motilal Nehru was a very influential person, and after his interview with his son, Jawaharlal Nehru was asked to sign the 2 week bond, which meant that he was to never visit the territory of Nabha ever again, which he duly signed, thus giving up and surrendering to the British only after some days of jail time, in a standard Indian jail.

There is also an epilogue to this whole Nabha incident, where Nehru refused to help one of his friend who was subjected to the same treatment he was subjected to when he was in Nabha, but that is an anecdote for another time. For now, the comparison of Nehru’s apology with the Savarkar mercy petition is enough.

The whole incident just shows that despite what the Congress says, even their own leader Jawaharlal Nehru had pleaded Ford mercy from the British, just like the Savarkar mercy petition.

Credits to Opindia for the content. Read the Opindia Article here.