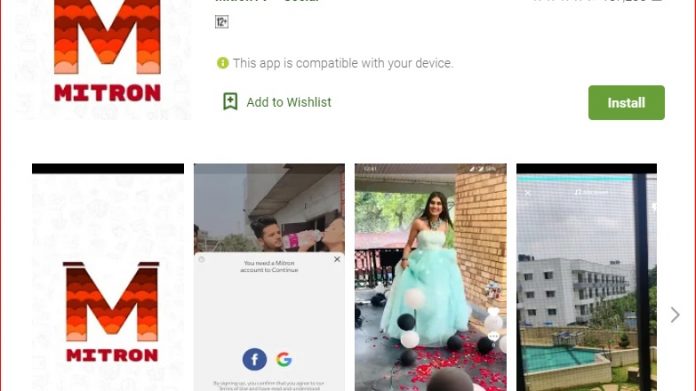 As the rivalry between YouTube and TikTok in India intensified, the anti-China sentiment also picked up. This could be owed down to a number of reasons such as the ‘Atmanirbhar’ campaign by PM Narendra Modi, or the coronavirus crisis whose blame largely lies on China, or the ongoing tensions on the Aksai Chin and the Sikkim border between India or China.

But out of all this drama, an Indian answer to the Chinese short video app TikTok known as Mitron app has benefited from it. This Indian short video app has clocked in over 5 million downloads. In its category, it is now ranked on the second spot, all in a month after its release.

According to some data reports, the Mitron app is getting an average of 5 lakh downloads daily. There are numerous reasons touted for the success of Mitron app. One reason is its name, which is the same as the famous word ‘mitron’ (meaning friend in Hindi) used by PM Narendra Modi in his speeches. The second reason is the short video format coupled with the sudden rise in anti-China sentiment throughout India and the ongoing campaign for India-made products and services.

The whole campaign against TikTok started after a spat between creators on the video platforms YouTube and TikTok. The anti-TikTok campaign picked up speed after YouTube deleted famous YouTuber CarryMinati’s video where he roasted a TikTok video creator. The video, before being deleted on grounds of ‘bullying’ had over 70 million views. Right after that, Indians started rating TikTok 1 stars out of 5 on Google Play Store. In the midst of this, the Mitron app picked pace and started getting downloaded.

The Mitron app has been developed by a student of IIT Roorkee. It supposedly works in the same way like its Chinese rival. According to users, even though there are some bugs, it is an easy to use platform on which one can create, edit, and share videos. Just like TikTok, one can simply download the Mitron app and browse the top-rated videos. For posting videos, one needs to register (sign-up) on the app and submit their details. After that, one can record a video, edit it and then simply publish it.