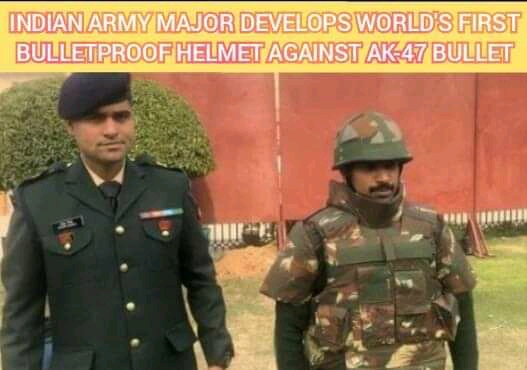 Time and again Indian army has proved its mettle, be it in the battlefield, or otherwise. Once again, India has a moment to be proud of their army. One of their army’s major has outdone itself in the field of science. He’s the first man to make a bullet proof helmet that can hold itself against the dreaded AK-47.

Major Anoop Mishra, who is a part of the College of Military Engineering of the Indian Army developed this helmet. Earlier, he had developed a bulletproof jacket that provided defense against sniper rifles. The helmet can withstand the impact from the bullet from a distance of 10 metres.

The College of Military Engineering has also developed other defense equipment. Recently, they developed a gunshot locator, India’s first and world’s cheapest. With this gun locator, the army can easily locate any terror threat and prevent any disaster.

Currently, India is the world’s second biggest importer of weapons, including AK-47.