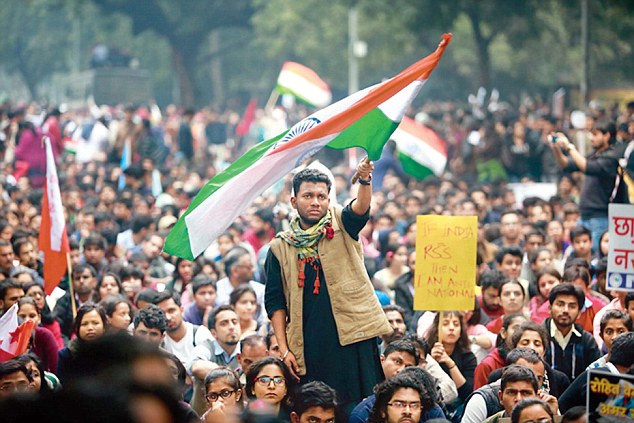 While the environment in today’s atmosphere in India is that of nationalism, we all know that seldom do we feel at peace when we turn on the news channels. Now don’t get me wrong here, it is good that people in India are gradually beginning to have a positive feeling about their country, which according to me was lacking before. But the way this is being expressed reciprocates a sense of negativity. It is not something that I as a citizen should be proud of. Extremist behaviour should not be promoted nor tolerated, even for good causes as history teaches us, in the case of Nazi Germany, that extremity leads to destruction.

I deliberately used the example of Nazi Germany to show you all what ‘Nationalism’ looks like. Hitler was a Nationalist. See how that turned out for him. Nationalism is extreme. It is a force that gives one the feeling of superiority and supremacy over any other nation. A nationalist, as the definition goes by always will consider any actions of his nation justifiable, whatever the consequences of that action are. A good example of such actions is The Holocaust. According to Hitler, it was for the greater good of Germany. Nationalism is a good tool to unite people in war times or in times of a national emergency, but it is to be remembered that Nationalism is used to unite people AGAINST other people, just as Mahatma Gandhi and Subhash Chandra Bose used to unite us against the British in the times of need. Nationalism is used to divide people, to make them have a negative sense of each other.

According to me, what India needs right now is not a brigade of nationalists but citizens who instead are patriotic. Who are followers of patriotism. There’s a very simple difference between nationalism and patriotism, nationalism is extreme. Patriotism is moderate. Patriotism can be defined as the feeling of love and respect for ones nation and its way of life, which one thinks is the best but also which is not forced upon everyone. Patriots always try and do good for the nation, but they don’t deem to justify every act of their country. They are morally better than nationalists. Patriotism involves the idea of having an ‘opinion’ which is a sin according to the modern day nationalism. Nationalism has one defined ideology, which doesn’t have any room for other opinions. In the modern times where globalisation rules and people increasingly feel connected with distant nations in the West, the concept of nationalism should be put aside for a while.

What India needs are people who are patriotic and whose opinions and ideas bring about a change in the current system, which if criticized moderately can be called ‘rusty’. It doesn’t need people who are against opinions which go against theirs. Change does not come like this. Change comes with ideas. Nor does it come with extremity. It comes with morals and with ideas that genuinely help the nation in its development. I believe that is the right way to make India a nation that is respected in and around the world. A VERY HAPPY 70TH INDEPENDENCE DAY TO ALL!

If you have any article that is worth publishing, mail us to-